Sodexo today announced it has been awarded a ten-year contract with leading global mining company Rio Tinto, estimated at AUD 2.5 billion over the ten years, to deliver integrated facilities management services in the company’s extensive operations in Australia’s Pilbara region. This is the largest contract of its kind for Sodexo and exemplifies the Group’s ability to deliver on major contracts in the Energy & Resources sector. 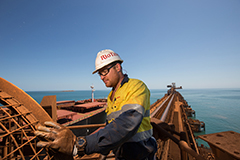 Sodexo was successfully awarded the contract after demonstrating a number of strengths in keys areas such as consistency and quality in services, alignment with improving quality in village life, and strong engagement with communities located within their operational footprint.

Michel Landel, CEO, Sodexo, said: “This contract is a major step forward for Sodexo. It demonstrates the value our unique global footprint and deep sectoral knowledge brings to clients like Rio Tinto, to enhance quality of life for teams operating in challenging environments. Mobilizing an international team of nearly 100 industry experts, we designed a solution for Rio Tinto that reflects the commitments of both companies to improved performance, responsible growth and development of the communities in which we operate. I am extremely pleased and proud to expand this partnership, which will bring the best of Sodexo to Rio Tinto.”

Johnpaul Dimech, CEO, Mining Worldwide, Sodexo, said: “Looking to the future, Sodexo’s role is to support Rio Tinto’s long-term strategic plan by continually reengineering ourselves to operate at the right cost while providing seamless service solutions and anticipating evolving needs in quality of life. This is a unique opportunity to strengthen the commitments and values we share to ensure an uncompromising safety culture and engagement with communities who we work alongside with in the Pilbara.”

The scope of services Sodexo will provide takes effect in the second half of 2016 after a transition period. Services provided under the contract include: