Sodexo’s Annual Shareholders’ meeting was held on January 23, 2018 at la Maison de la Mutualité, in Paris, and was chaired by Sophie Bellon.

Quorum was established at 77.5 %, and 1,498 shareholders were present, represented or voted by correspondence.

All the resolutions put forward by the Board of Directors were adopted, notably:

The detailed results of the votes will be available on Sodexo’s website as of January 24, 2018 in the section “Finance – Shareholders – Shareholders’ meeting”.

At the end of the Shareholders’ Meeting of January 23, 2018, Denis Machuel succeeded Michel Landel and officially became Chief Executive Officer of Sodexo. Sophie Bellon thanked Michel Landel for his commitment and determination throughout the years, during which he contributed to Sodexo’s growth. Sophie Bellon also welcomed the arrival of Denis Machuel, who has all the qualities and experience to meet the challenges facing Sodexo in the future.

To read the full version of the press release, please download the PDF: 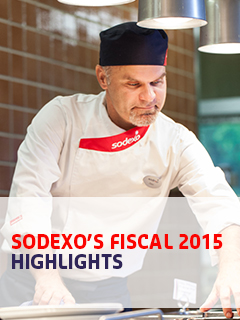