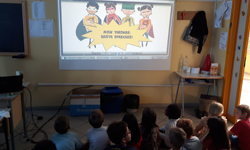 Consumer waste accounts for three-quarters of food wasted at school. In fact, nearly one fourth of every child’s plate at the canteen ends up in the bin. Both children and kitchen staff are key players in reducing food waste today and can serve as the best ambassadors of change for a better, more sustainable future.

With this in mind, in June 2015, Sodexo and other founding members of the International Food Waste Coalition developed a pilot project, SKOOL, with an ambitious goal: to build a school food value chain without food waste. The results from the pilot phase – which was deployed across six schools in France, Italy and the United Kingdom from January to July 2016 – reported an average of 12 per cent food waste reduction, corresponding to 2.5 tons of food waste avoided. Over 4,500 meals were saved, equivalent to over € 9,000.

Since September 2016, Sodexo has been deploying the programme exclusively across its client sites. An extension phase aims to increase the number of European countries to benefit from the programme, double the number of children directly sensitised, and double the total amount of food production covered by the programme. SKOOL will now play an integral part of Sodexo’s commercial offer for schools, demonstrating the steadfast commitment by the company to reduce food waste across all of its segments.

“The SKOOL programme will provide significant benefits to our network of schools and suppliers. Not only does food waste prevention lead to increased savings and new business innovation, it fosters employee motivation and teamwork around a positive project. Integrating the new programme into our schools offering will help Sodexo and our clients more accurately track food waste and implement effective measures to tackle the issue at every interaction across the food chain,” said Damien Verdier, Group Chief Strategy,Sodexo.

The project also led to the development of a comprehensive educational toolkit that explains in-school and at-home assignments that raise children’s awareness and knowledge about food waste and a detailed kitchen methodology that outlines best practices for staff to optimize food production. The materials are available in three languages and will be accessible online for the 2017 school year.

“As teachers we know that what we do at school needs to be completed by actions at home in order to help children achieve sustainable behaviour change,” said Francesca Mustica, teacher and education coordinator for Calcinato Municipality, Italy. “Creating activities and materials to help children talk about food waste at home would allow children to become food waste ambassadors in their homes.”

Sodexo and the IFWC notably partnered with the Food and Agriculture Organisation (FAO) and LeanPath, a food waste measurement and reporting system, to achieve better results in minimising food loss and waste at the kitchen and pupil level. The LeanPath system also powers WasteWatch, Sodexo’s global programme to eliminate avoidable waste—organic waste and recyclables—to landfill.